Off the Air Webcast

All eyes will be on the Carthage Tigers Friday night as district seeding will be determined by their game against the Nixa Eagles, as a win by 11 or more points would give the Tigers the one seed at districts.

Jon Guidie, Carthage head coach, says, “There’s a lot riding on this game, a conference championship, district seeding. That’s not something we choose to focus on right now. We wanna come out and focus on the day to day things that allow them to be successful.”

The focus this week for the undefeated Tigers is the upcoming battle against an Eagles team that was handed their only loss on the year by Webb City.

Justin Sneed, senior wide receiver/cornerback, “It shows us that they might have folded. Webb City’s always got a big ego, we think that they just weren’t prepared enough. We feel that we’re able to compete, if not beat, Webb City. Coming in, that makes us confident playing this team.”

Coach Guidie believes the key for his boys will be shutting down sophomore running back Ramone Green who serves as a vital part of Nixa’s offense.

Guidie says, “He’s very dynamic, shifty, fast, everything you want in a running back. And they’re gonna use him. He’s gonna get 25 to 30 carries. So we definitely need to know where he’s at and the first thing we need to do is stop the run.”

Sneed says, “It’s definitely not something we haven’t seen yet with Joplin and Nathan Glades. We schemed him pretty well. And we shut him down with his lowest rushing yards of the season. So we feel pretty confident.”

The Tigers are promising that confidence will be on display for everyone who attends on Friday night.

The Pittsburg Purple Dragons visited the Joplin Eagles on senior night in what turned out to be a barn burner.

The Tigers played the St. Pius X Warriors in Jefferson City for the title. 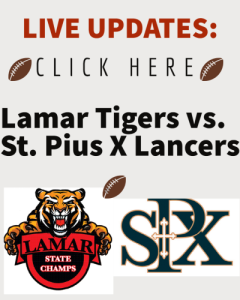