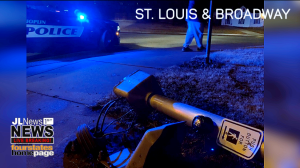 JOPLIN, Mo. — Two vehicle crash sends one to the hospital at Broadway and St Louis. It occurred at 8:03 PM. Joplin Fire Department worked to clear the intersection. While Joplin Police directed traffic.

Both vehicles were towed. The minivan which traveled to the Northeast corner took out the pedestrian signal. 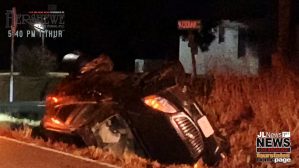 CRASH #1 Head-on crash occurred about 5:30 PM on MO-60 between Neosho and Granby.  According to radio reports this was a highway-speed crash.

We believe up to 5 people (see inset report) were transported to Joplin hospitals from this crash. #JLNtipsters text and called us regarding the highway being blocked.

CRASH #2 (see video) Rollover crash, single vehicle was reported by an officer as a passerby according to initial radio traffic.

Neosho Fire Department and Newton County Ambulance both responded to the crash at Hwy AA and Kodiak Road reported around 5:40 PM.

Updated information, no report and no reported injury from the driver.  Missouri State Highway Patrol do not file a report if the driver/occupants are uninjured and there were no property damages.

“In Missouri, we’ve averaged 16 people dying on our roadways each year during the Thanksgiving holiday period,” said Jon Nelson, MoDOT assistant to the state highway safety and traffic engineer.

“These tragedies are completely preventable and should be considered unacceptable. Instead of simply accepting these deaths as inevitable, we have every reason to believe zero fatalities can be achieved during the 2019 holiday if we all make responsible choices behind the wheel.”

OKLAHOMA: their website has a continually updating map www.okroads.org

SOUTHWEST MISSOURI -- When you think of an empty bowl - it may lead to thoughts of chores like washing the dishes or what you're making for dinner. But this time of year, it's also a focus to feed the hungry in Southwest Missouri.

Mark Strayer, Lamar Artist, said, "I call it a hobby out of control."

Brownback speaks out about religious freedom

KANSAS -- We're hearing from former Kansas Governor Sam Brownback for the first time in a while.

He's the country's International Religious Freedom Ambassador. In an online video, he says he's seeing movement toward peace in the Middle East. But he's concerned about persecution in places like Myanmar and China.

KANSAS -- We are just a few weeks away from the November general election. One of the biggest races in Kansas is for the open U.S. Senate seat -- and multiple polls are releasing predictions.

We have seen six polls from different organizations since March and depending on which poll you see, there could be quite different results.