JOPLIN, Mo. — We’ve learned a little more of the story from New Year’s Day that began with a man and goat-napping in rural Carthage at a men’s spa.

Oklahoma authorities tell us the trek snaked through Carthage to Joplin to Galena and eventually into Oklahoma in the early morning hours. And eventually ending outside of Tulsa.

The victim who was let out of the truck in Oklahoma along with his pet goat was from Nevada, Missouri. His name is not released.

Since the original crime of stealing the truck would have occurred in Missouri we contacted the Jasper County Sheriff’s Office regarding the pickup. Was it stolen?

“We were contacted by Oklahoma Highway Patrol regarding the kidnapping of a man and his pet goat, occurring early Wednesday morning at Vegas Video. We requested the victim file a report with our office. So far the victim has yet to do so. So nothing has been filed in Missouri as of Friday, January 3.”

JASPER COUNTY, Mo. — According to compiled reports from sister Nexstar Media stations in Springfield and Kansas City, an Oklahoma man allegedly stole a pickup in rural Jasper Couty with a sleeping passenger and his goat inside.

Then he drove from Vegas Video and Temptations Spa, 1876 CR 100 (rural Carthage address), through Kansas and ending in Oklahoma.  That’s about 130 miles Oklahoma authorities say.

According to an Oklahoma arrest report, two men parked their truck (names unknown) outside the I-44, Exit 22, Vegas Video and Temptations Spa early Wednesday morning. The driver went inside and the passenger fell asleep. When the passenger awoke, a masked man was driving the truck and pointing a gun at his head.

That masked man is now identified as the suspect, 40-year-old Brandon Kirby.  The report states he drove from Missouri through Kansas into Oklahoma. During the 130-mile ordeal, Kirby took methamphetamine, pistol-whipped the victim and continually threatened him, according to the arrest report.  It doesn’t mention the treatment of the goat. 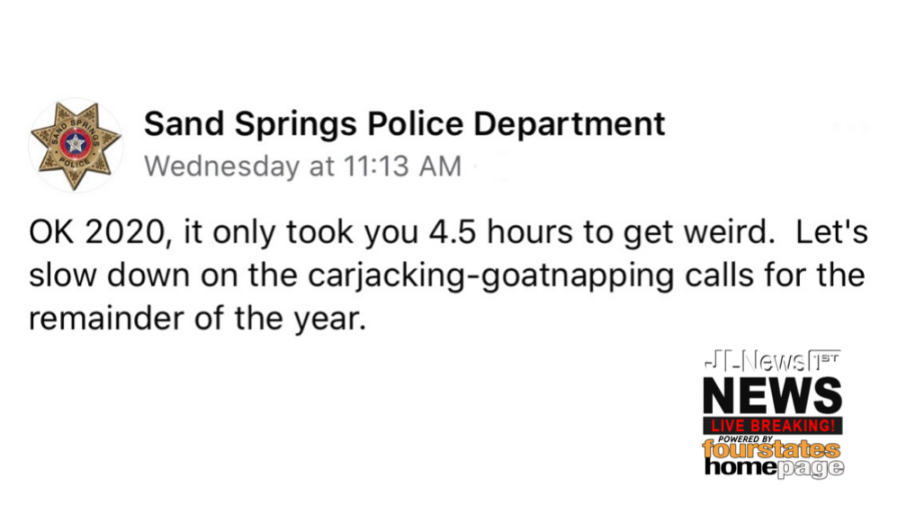 He was eventually arrested in Sand Springs, Oklahoma, after he let the passenger and the goat out of the truck and the victim called 911, the Oklahoma Highway Patrol said.

Kirby, who is from Mannford, Oklahoma, west of Tulsa, was jailed on suspicion of kidnapping, pointing a firearm and being a felon in possession of a firearm. The crimes carry a potential $100,000 total penalty, according to the Creek County Sheriff’s Office. Jail records don’t list an attorney who might speak on his behalf. He will appear in Creek County, Oklahoma, court on Tuesday morning.

“OK 2020, it only took you 4.5 hours to get weird. Let’s slow down on the carjacking-goatnapping calls for the remainder of the year.”

The stolen truck has not been confirmed through Jasper County authorities as a stolen vehicle in Missouri.  We are waiting until business hours Friday to talk to Jasper County Sheriff’s Office.  On Thursday we attempted to research the story and did not find anything on our own. So with this new Oklahoma information, we will update with Jasper County information.

Ad legend Dan Wieden, who coined ‘Just Do It,’ dies

The Back the Badge fundraiser serves food to equip …

Ad legend Dan Wieden, who coined ‘Just Do It,’ dies

The Back the Badge fundraiser serves food to equip …

The Kansas Supreme Court to come to Parsons

How the Rangeline Bridge construction is impacting …

How is Carthage preparing for the Maple Leaf Festival?

Some extra help for the Baxter Springs Police Department, …

Fly high! For sale… A Missouri airport plus more

Above average through Thursday; Highs in the 60s …