UPDATE #2: 20-year-old Kem Brown, of Carthage, was arrested for Resisting by fleeing, DWI, Careless Driving, MIP, Assault 2nd Degree and Property Damage 1st Degree. A passenger in the vehicle was transported by EMS and remains in a Joplin hospital with severe injuries. 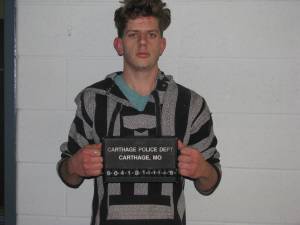 Around 10:45 an Officer with the Carthage Police Department attempted to stop a vehicle for suspicion of driving while intoxicated at 11th and Main street. The vehicle fled northbound through a residential area then westbound onto Central Ave where the suspect lost control of his vehicle which overturned and crashed into Boomers BBQ, causing substantial damage.

UPDATE: Chad Dininger of the Carthage Police Department tells us a 20-year-old driver is facing DWI charges after a short pursuit Thursday evening that ended in a dramatic crash.

“Officer suspected a DWI driver and attempted a traffic stop at 11th and Main,” Dininger tells us. When the vehicle didn’t stop a pursuit was initiated. North on Main to West on Central.  Vehicle crashed out into Boomers BBQ & Catering.

Tipsters tell Joplin News First police were far behind the crashed out Dodge Nitro. The drivers name has not been released yet. A 21-year-old male passenger suffered non-life threatening injuries.

CARTHAGE, Mo — Just before 11:00 PM tipsters let us know about a possible police pursuit in Carthage.

Upon our arrival it appears a small SUV/truck had flipped into the Boomers BBQ, 1123 West Central.

Two male subjects were in the vehicle. Medical status is unknown at this time. However no life-threatening injuries we believe. They were both being checked out by EMS.

We talked to the owners of Boomers and they were unsure the extent of damages. They will have to wait until city inspectors arrive to evaluate the structure. We will try to update you in their progress.

Boomers has been at this location 5 years but in business 16 years.

More information as it becomes available.

TRI-STATE AREA — After storms rolled through the Joplin area around 6:00 PM Monday evening the watches and warnings were cancelled. Reports of downed power lines, trees and tree limbs causing scattered outages began to be reported.

Initially 1,500 without power since 6:00 PM this evening. Liberty Utilities workers are now evaluating where the outages are and the best strategy to restore those services.

JOPLIN, Mo. -- Just after 7:30 AM Joplin Police were summoned to the 1200 block of South Maiden Lane, reports that a person was laying on the ground next to a vehicle.

The body was discovered by someone exercising in the area, walking the cemetery.

Redings Mill Fire District were dispatched and radio reports upon arrival observed a vehicle on its side.