UPDATE: Death is determined to be foul play through autopsy results.

JOPLIN, Mo. — Joplin Police Department are investigating a murder, 1700 bk S Roosevelt.  Shortly after Noon, Wednesday, police responded to a call for an unknown trouble at the Westside Storage Units.

“Upon arrival officers located a male who had been shot. The male was transported to Mercy Hospital where he later died,” according to a media release from Joplin Police Wednesday afternoon. The deceased man is from Joplin. Identified as Jonathan E. Powell, 36.

Friends of Powell tell us he had been active on social media Wednesday morning.

Wednesday during our live broadcast Joplin Police towed the vehicle Powell is believed to have arrived in to the complex. A grey sedan missing most of the front clip.

Joplin Police summoned the Joplin Fire Department to cut lock(s) to access storage units Wednesday just before 5:00 PM. You can see JPD investigators taking a closer look at contents behind crime scene tape in the secured scene in our live video. 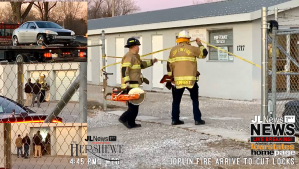 There are a lot of unknowns still in what happened.

An autopsy determined Thursday in Springfield foul play is involved.

EARLIER INFORMATION: As of early Wednesday evening investigators were working to pull security footage from the camera system at the complex. It’s unknown if they were successful securing images to determining if Powell was alone inside the complex or what occurred.

Joplin Police officers will be staged at the scene to keep the integrity of the investigation overnight and into Thursday pending autopsy results.

Police are seeking help from the public. If you have any information in this case, you are asked to contact the Joplin Police Department at 417-623-3131 x.885.

This is a continually updating story. More information as it is available on Thursday.

CARTHAGE, Mo. -- After nearly two years a 12-year-old girl with Cystic Fibrosis is getting her wish granted.

Saturday, they held the Cooking for a Cause breakfast fundraiser at the Webb City Farmer’s Market.

A real estate company held a fundraiser Saturday, in honor of the company’s mascot

Queen beams as she returns to Ascot after COVID-19 hiatus

Hit by a ransomware attack? Your payment may be deductible

Chain-reaction crash at Spring River bridge, one rolls on its side; Missouri State Highway Patrol tell us three vehicles involved