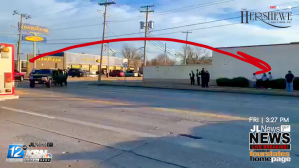 A male passenger who was riding in the back of one of the pickups, was ejected 40-50 feet according to police and eyewitnesses.

Joplin Police Department Traffic Major Crash Team mapped out this crash. You will see the orange marks on the street that are points where truck tires were when the crash stopped, or debris, trajectory etc.

The major crash team is most likely seen mapping fatality or serious crashes resulting in injury like this one.

According to EMS radio medical reports the male was awake and alert, albeit injured, talking. He came to a stop on the south side of the road near a building and bushes (see photo).

Joplin Police follow up with us later and state, “The driver of the pickup was cited for DWI-DRUGS. The passenger who was ejected suffered moderate injuries.”

That male passenger was transported priority one to an area hospital.

The occupants of the other pickup refused medical care.

Updates to this story as soon as they become available.

JOPLIN, Mo. -- Just before 10:00 PM Thursday night a Joplin Police officer on normal patrol near West 7th and Picher noticed a passenger vehicle driving erratically and went to perform a traffic stop. The vehicle decided not to stop.

Cpl Trina Jones of the Joplin Police Department tells us the details, from there it was a short pursuit north through the North Heights Neighborhood and then into Roanoke. The vehicle lost control at Glenview and North Byers and the rolled and crashed into a parked car in the 800 block north.

The Annual Lighting of the Pump, which sits in the middle of Main Street

LaRUSSELL, Mo. — The pump has stood in the middle of the Main Street since 1903 according to records. There was a pump a few blocks away earlier than that but this one was set more than 100 years ago.

LaRussell population has never broke 300. And the past 80 years it's hovered around 100. It was one of the first towns settled in Jasper County, Missouri. It is where the Union Pacific Railroad decided to make a stop and that made the town. The first school in Jasper County was built there in the 1830's.

UPDATE: The Missouri State Highway Patrol update information Wednesday. The 20 year old driver, Nicholas Sill, of Asbury, Missouri, was arrested for DWI in the crash. He was then released and transported by private vehicle to Freeman Hospital for treatment of minor injuries.

The passenger of the pickup is not listed in the crash report since he refused medical treatment. Which is normal protocol with Missouri State Highway Patrol online reports.