JOPLIN, Mo. — One of the symbols of Joplin’s strength through the Joplin EF-5 tornado moved a little today.

Crossland Construction moved the St. Mary’s Catholic Church Cross. The Cross was moved about 8 feet and they removed the large braces that were holding it steady since the tornado. 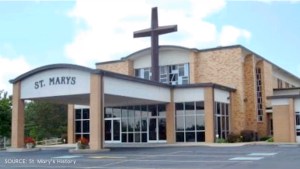 The Cross stood within the former building. Photo date unknown, but prior to May 2011.

“We cut off just a couple of inches and just swung it over,” Crossland workers on site told us.

Everything surrounding the Cross was destroyed in the EF-5 tornado in May 2011. The Cross has stood since then with large braces holding it up to steady it.

The base of the cross actually buckled a bit we were told by an engineer. There are pieces of angle iron that were put in place after the tornado. Coupled with those large braces to keep it steady these past 8 1/2 years.

Now it will stand alone again.

The sanctuary, elementary school and parsonage relocated permanently to 32nd and Central City Road after temporary locations for a period of time.

The church sold a majority of the land to Empire District Electric but they retained the land the Cross still stands upon.

Groups call for reintroduction of jaguars in US Southwest

In a recently published paper, they say habitat destruction, highways and existing segments of the border wall mean that natural reestablishment of the large cats north of the U.S.-Mexico boundary would be unlikely over the next century without human intervention.

In television interviews, the Wyoming Republican said there was “no question” an attack like Jan. 6 could happen again if Trump's claims go unchecked.

(WJW) — The U.S. Centers for Disease Control and Prevention said Saturday they recommend schools stick to implementing COVID-19 health guidelines through the end of this school year.

22 people rescued after roller coaster in Arizona gets stuck

76-year-old with COVID-19 wakes up moments before cremation in India: reports

Sharks use Earth’s magnetic field as a GPS, scientists say

Missouri State Highway Patrol pursuit ends at Shoal Creek, individual exits car to swim across; Rescue crews searching downstream for male, but he could have simply gotten away

Joplin Tornado Before & After Pictures