Ice cream on a warm afternoon can bring people together. But, for this family, it’s not just the cold treat that strengthens their bond.

“It was so heartbreaking,” explained Kathy Morrison. “Because there is no cancer in our side of the family, so where it came from, we don’t know.”

Kathy Morrison’s daughter, Brandy Jackson, was diagnosed with breast cancer in January 2016 after finding a lump through a self breast exam.

“I was in denial; I didn’t think it would be breast cancer,” said Jackson.

“To see and hold her hair and lose her hair, and all the emotions and stuff you go through, as a mother, it was just heart-wrenching,” Morrison added.

After a double mastectomy, chemotherapy, and radiation, Brandy successfully completed treatment in October.

“We’ve been through a lot with our family within the past year,” Jackson added.

Little did they know, the news they would receive in March of this year.

“They called me back the next day,” said Morrison “A year before that, we went through it with my daughter.”

Kathy was diagnosed with breast cancer after a routine mammogram — an appointment she almost didn’t go to.

“Thank God I did, because now I’m triple negative,” Morrison continued. “I’m on my second treatment. Of course, I went through it with my daughter, so I knew what to expect.””It wasn’t the fact that there’s not hope, because there is, and I know there is; I’m proof of it,” said Jackson. “But it was the fact that I was very sick during chemo, and I didn’t want to see her go through that.”

Now, Brandy is returning the support her mom once gave her.

“I know God’s given me a gift to encourage, and I just feel like there’s a reason why I got diagnosed first,” Jackson explained.

Kathy has a long road ahead of her, but the unfortunate diagnosis is strengthening her relationship with her daughter.

“We are very close and it has brought us closer,” Jackson said.

Proof the bond between a mother and daughter is unbreakable.

This Buddy Check 16 story was sponsored by Freeman Health System.

“White supremacy is a poison”: Biden says in Buffalo 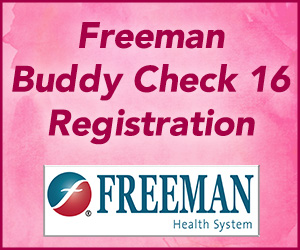 Chicken Mary’s: One half of a decades long “Chicken …